Posted on February 21, 2014 by cairngormwanderer

The Sappers’ Bothy on Ben McDui

I’ve noticed folk referring to ascents of Ben McDui remarking on passing the ‘ruined hut’ – or the Sappers’ Bothy if they know the name – as a sign that they’re nearly at the top.

Certainly, in the grey void of the plateau on a day of low cloud, it can be a welcome enough confirmation that you’re on the right road, whether heading up or down. 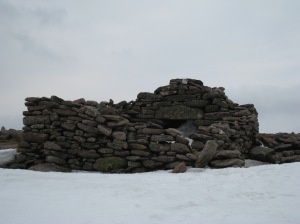 Sappers’ Bothy in the snow

But the Sappers’ Bothy (NN990988) has been more of an aid to navigation than most people realise.

For it dates back to the early years of the 19th century, when Britain was being properly mapped for the first time.

The Trigonometrical Survey of Scotland, to map the country accurately, began in 1802 and continued, with a long break, until the results were published in 1852. Trigonometry, for those who forget their schooldays, or who managed to miss them, is a branch of maths which involves lots of angles and triangles and enables you to work out heights and distances too great and too far away for your three-metre retractable tape measure. By starting with one accurately measured baseline you can then accurately map the whole country by using a network of triangles. However, the corners of each of those triangles have to be within sight of the corners of as many other triangles as possible to allow greatest accuracy. And that means placing your corners –triangulation stations, or trig points – at vantage points where they enjoy as wide and as distant a  view as possible. Hill and mountain tops fit the bill just nicely, which is why you usually (but not always) find trig points at the summits of hills.

The survey equipment necessary to make, check and re-check the numerous measurements required was big, bulky and fragile, and required expert handling. Added to the fact that, as hill climbers today know well, views from the tops of hills are by no means guaranteed, this mean that observations were protracted affairs and required a continuous presence on the hills for weeks, if not months. The station at the summit of Ben Nevis, for example, was occupied with measurements from 1st August to 14th November 1846. They noted observations on 17 points, including 28 observations to Ben More on Mull, 42 to Ben Wyvis and 35 to Ben McDui.

Inside the Sappers’ Bothy, looking at the fireplace 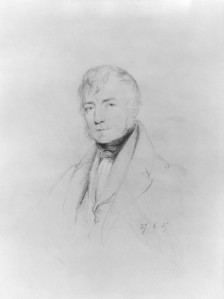 To enable observations to be taken over such a period, and to make the most of even brief spells of clear weather, the soldiers of the Ordnance Survey set up encampments on most, if not all, of the hills they had stations on. These are known as Colby Camps after Captain Thomas Colby, who was in charge of the Trigonometrical Survey. These involved tents but also, habitually, turf or stone-built buildings with roofs of tarpaulin where fires could be lit for cooking, warmth and to help dry out clothes.

On McDui, as elsewhere, everything needed would have been taken up by pony or on men’s backs – including all the fuel they will have burned for cooking and heat. I’ve not been able to find how many people would have occupied the station on McDui but, given the times, I think it’s fair to assume at least two surveyors, who would have been officers, and a fair few ‘other ranks’ to act as man-servants and general labourers of various degrees of skill. Probably no fewer than six in all and perhaps as many as a dozen? Even at the lower figure, anyone who has stood inside the walls of the Sappers’ Bothy will appreciate it will have been a tight squeeze and that, when stores are added to the equation, there must also have been tents or other tarpaulin-roofed shelters constructed on an area that is largely paved with boulders. It can’t have been the most pleasant of billets, although there is a strange attraction in the thought of sitting in front of a roaring coal fire just yards from the summit of Scotland’s second-highest mountain. 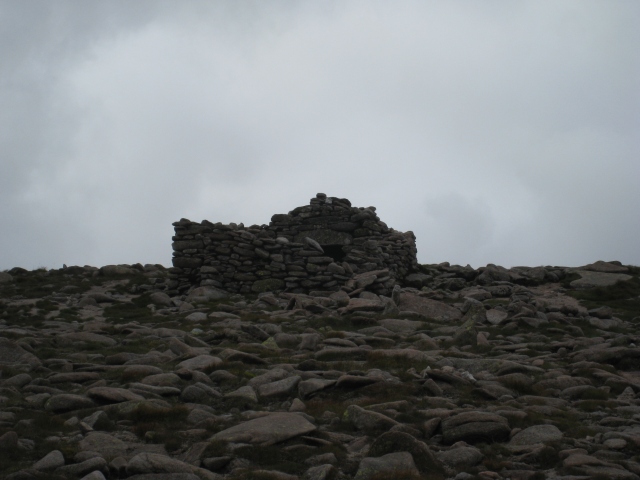 The barren plateau setting of the Sappers’ Bothy

There’s an excellent article on Colby Camps in the 2013 Scottish Mountaineering Club Journal, which I have shamelessly pillaged for extra material here. It’s not mentioned in that article, but reading that, and writing this, I wonder if it answers a puzzle further south in the Cairngorms. Near the westernmost of Carn Bhac’s three summits, just below the line of the broad ridge between them, lie the ruins of a stone-built building. I’d often wondered why anyone would built anything in such a remote position – it seemed to have no logic even as a shelter for stalkers and, in any case, was too substantial a build. But it would make sense as the cook-house of a Colby Camp. Carn Bhac is a tremendous hill for views (given clear weather, of course) and this would be an ideal location for an Ordnance Survey triangulation station.

Lest anyone get too dewy eyed about the sappers (Royal Engineers) who kipped on McDui while making maps, it’s not exactly the fruits of their labours you clutch in your frozen mitts as you try to navigate your way down out of a white-out on the plateau. Modern mapping is based on a re-triangulation which took place from 1935 to1962. And for those who use GPS: that’s based on magic and witchcraft, and no good will come of it.

12 Responses to The Sappers’ Bothy