The Smith-Dey Bivouac, under the large boulder in the centre of the photo

The Smith-Dey Bivouac in the Garbh Coire Dhaidh is neither well used nor particularly useful these days, being stayed in probably more for the sake of novelty than any particular utility.

It sits at roughly 947985 just inside the large, open Garbh Coire Dhaidh amid a scree slope west of the infant Dee (the Allt a Garbh Choire), near some pleasant clear pools and small grassy meadows. It’s under the lowest of the larger boulders and has a tiny cairn on top. 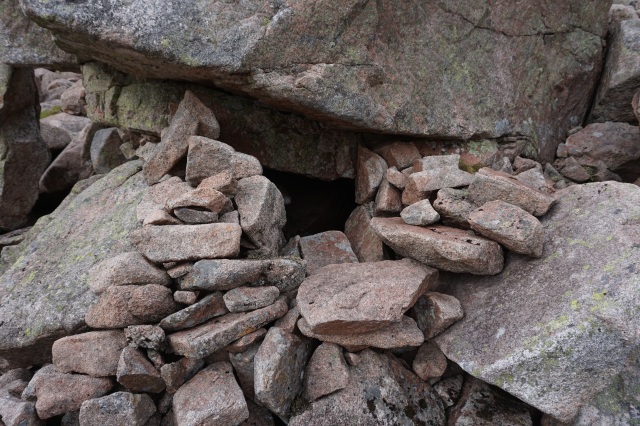 The entrance is a bit of a tight squeeze

It’s an effort to wriggle into the entrance, and inside is a low cavity with room for two people – maybe three at a pinch – to lie down. 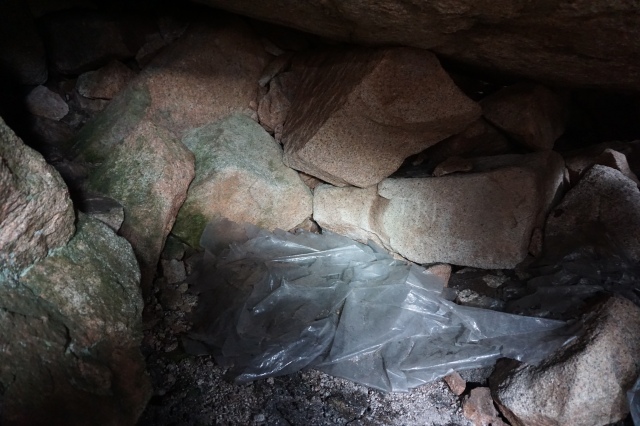 Not exactly spacious inside either

Water is close by, the Dee flowing past just a few yards away.

And, seriously, if you have any ambitions to comfort, forget the howff and take a tent: in good weather those meadows are an idyllic spot.

The howff dates back to the late 1940s or perhaps early ’50s, when Mac Smith and a group of friends, inspired by an article by Ben Humble about bivvying in caves, were engaged in an active search for decent natural howffs in their stamping grounds of the Cairngorms. This search predated even the Secret Howff, which was a wholly built construction, and involved exhaustive searches in some esoteric corners of the range.

Some unsatisfactory subterranean refuges were found before the plum of the Smith-Winram Bivouac was discovered/excavated on Beinn a Bhuird, but Smith and another of the group, Graeme Dey, found another prize in the Smith-Dey. It wasn’t much, but at that time was the only shelter in the Garbh Coire complex, which was then getting increasing attention as a climbing venue.

It was superseded by the Garbh Coire Refuge in the early 1960s and has probably seldom been slept in since – although a visit in August 2018 did show evidence of relatively recent use.