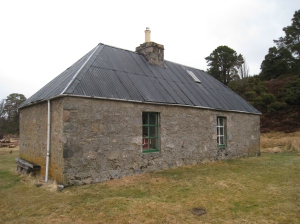 The Feshie bothy from the south

Ruighe-aiteachain is currently undergoing a major renovation and will be unavailable to the public until work is completed. More details will be posted as they become available.

Ruighe-aiteachain (pron. Roo-ee Etchachan, second ‘ch’ as in loch). Often referred to as The Feshie Bothy.

Located up Glen Feshie at grid ref NN 847 927. It’s snuggled close in to the foot of the hill, to the east of the river as you follow it upstream southwards, not far before it starts to turn to the east.

The closest approach is to park your car at a car park at grid ref 853 977, about a kilometre before Achlean Farm. Walk along the road to where it ends at the farm and pick up the footpath which leads (across two normally straightforward stream crossings) to the bothy in about 5 to 6 kilometres.

It used to be possible to approach the bothy along the west of the river – a longer approach but one where it was possible to use a bike. However the bridge at Carnachuin (846 938) was destroyed in a flood in 2009 and fording the river is only advisable when the water is low.

It is understood the estate intends to replace this bridge.

This approach follows the start of the classic drove road through Glen Feshie to the Linn of Dee.

The bothy itself has two rooms: the first, as you enter, containing sleeping bunks and lots of floor. 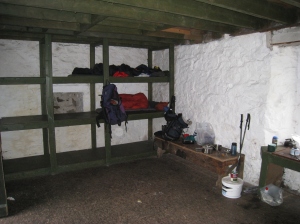 Enter the second room through a rather elaborate door to find a more comfortable room with tables, benches and a good stove, which is said to be a lot more effective at heating the room than the previous version. 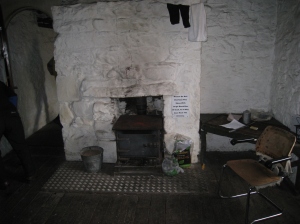 The robust stove in the good room

There are only about half a dozen bunks, but this is a spacious bothy and there should be no problem in sleeping many more people between the two rooms.

The estate does not want people picking dead or live wood from the area around the bothy, but generally sees that a plentiful supply of wood is stacked against the north wall of the bothy. This can sometimes be a bit wet for good burning and it is well to take a small quantity of coal to ensure a reasonable heat. A 10kg bag between two is not unreasonable to carry.

There is a good water supply a few yards from the bothy, with a cistern and pipe ensuring easy collection from a small stream coming off the hillside. 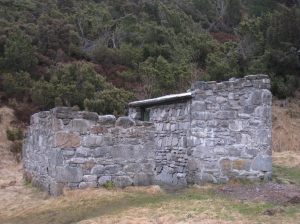 There is an outside toilet in a separate building a few yards south of the bothy. This is a septic tank and is flushed with buckets of water from the nearby burn. Put only human waste and plain toilet paper down this. Wet wipes and other products do not break down in the tank and can cause blockages.

Oh, and here’s a photo of the ‘elaborate’ door referred to above. Typical bothy architecture really. 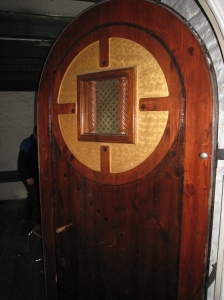